A delegation of Panathlon in the European institutions 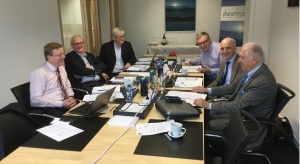 The antenna of Panathlon in Brussels, working for a few months, will become something more meaningful than a mere appendix of Panathlon International in Europe, but it will take on the appearance of a real representation in the European institutions.

This is the sense of the conclusions reached by the working group, which met in Brussels at the headquarters generously made available by Philippe Vlaeminck, member of Panathlon and renowned lawyer. President Pierre Zappelli was present along with Past president Giacomo Santini, International board member Paul Standaert, the president of District Belgium, Thierry Zintz, president of the club Wallonie Bruxelles Philippe Housiaux, besides Vlaeminck. The different dynamics were analyzed that allow Panathlon International to participate in the activities of the European organizations where policies affecting sport are treated.

The first contact has already been accomplished with the European Commission and now some initiatives have started to gain visibility in the European Parliament. The main aim of this action is to encourage the submission of joint projects such as the Erasmus plus sport program, with the involvement of all Panathlon clubs and many external partners, such as the International Committee for Fair Play and the International Pierre de Coubertin committee. The operational and logistical terms were set that will lead to the creation of a real seat where all panathletes can go for advice and information on activities in Europe.

Then President Zappelli reported on the initiative that will lead to the creation of a similar antenna in Lausanne with regard to the relations with the International Olympic Committee.