Summary Of Working Days In Florence 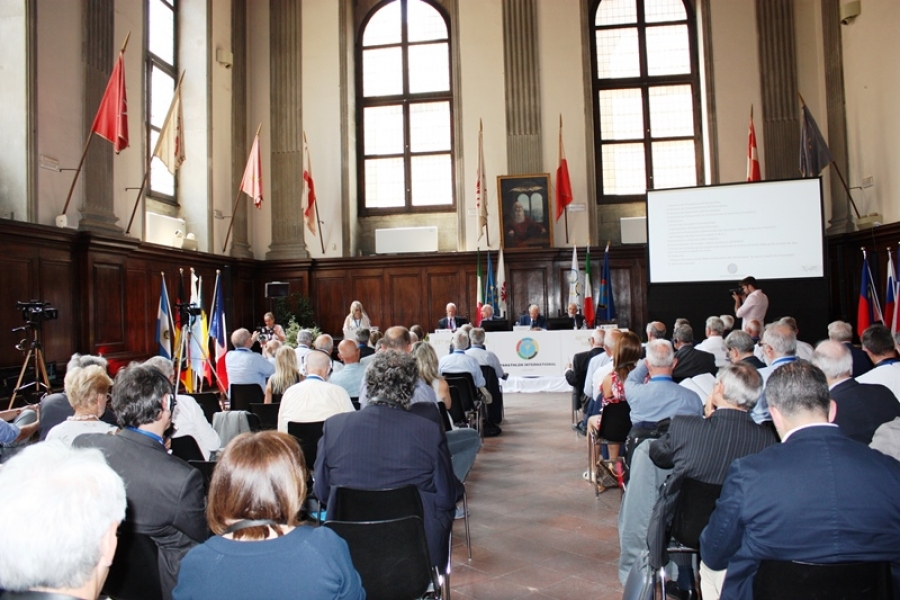 The five days of Panthlon International ended in the splendid setting of the Grand Hotel Baglioni’s terrace in Florence with Giotto’s Bell Tower in the background.

Between Wednesay 13 and Thursday 14 June 2018 at the Hotel 500, only 10 Km from the heart of Florence, the following meetings were held:

• Panathlon International Cultural Scientific Committee (Elaine Cook, President, Anne Tivas, Antonio Bramante, Eugenio Guglielmino, were assisted during the first day by the President and General Secretary)  from such meeting  emerged  a document summarizing the Committee’s program guidelines, objectives and suggestions for Panathlon International and its Clubs as well as indications for its Junior Clubs, the Literary Contest and Erasmus plus.

• Expansion Committee: for the first time since its establishment, most of the members met personally: Amato Oronzo (President), Leo Achilli for the Republic of San Marino, Francesco Garbini, Leo Chisci, Gennaro Esposito for Italy, Bruno Catelin for France and Rodolfo Camps Rosales for Mexico. Each member reported on the work carried out in these two years and on the projects he intends to implement. The outcome of this meeting will produce a final document which will be submitted during the next International Committee meeting.

• President’s Board Committee: an utmost important meeting during which was noted with great satisfaction the possibility to participate (for the first time) at the Youth Olympic Games in Buenos Aires with a program that will be coordinated by the Representation of Lausanne in collaboration with the President and the General Secretary of Panathlon International, lastly approved by the International Olympic Committee (IOC). In   this   Committee,  moreover, it was decided to Submit to the Italy District by identifying already a  candidate who will be consulted shortly in order to verify his availability.

Friday, June 15m 2018: The works relating to the 21° Panathlon International Congress took place with a great deal of satisfaction. Lecturers of the highest order have addressed the various issues pertaining to the Conference with great  professionalism and interesting contributions. For the first time workshops were introduced so as to involve participants in worktables, discussing on how Panathlon International could actively cooperate to address issues related to the sports world. The only negative point noticed was the lack of participation by clubs throughout the work day. We should perhaps consider different solutions to increase the involvement of clubs and those interested to issues being dealt with, so as not to undermine the work carried out, great professionalism, the very high Committee standards and  that of its lecturers. Furthermore,  it should not be underestimated in terms of culture and investment which Panathlon International has undertaken and has committed for the achievement of the Conference.

Before restarting the afternoon working session, an important moment of international collaboration took place, through the signing of a Collaboration Agreement with EFPM in the person of its President, Mr. Christian Hinterberger, in presence of the  CIFP Vice President, Mr. Maurizo Monego.    document

Saturday, June 16, 2018: a vital concept for our Association is represented by the General Assembly, unfortunately noticing a modest participation: 116 clubs voting on a total of 257 clubs eligible. But in line  with the members of the past editions of half term Assemblies.

This session provided for an extraordinary part to propose a statutory change with the possibility of re-election of the International President for a further 4 year period. After a brief explanation of the motivations and some contributions, the statutory amendment was approved with 84 clubs in favor, 22 unfavorable and 4 abstained ( passed to 10  and 6 clubs did not express their vote).

Votes were also expressed on all  the reports (presented), the final balance sheets and budgets attached to the Agenda which were  approved by a substantial majority At the end of the meeting, the Assembly was invoked by  Mr. Philippe Housiaux, President of Panathlon Club Wallonie-Brussels to approve the Declaration “le sport, ‘esprit de l’humanitè” voted for unanimously.

As previously anticipated in the introduction, after an enthusiastic exhibition by the flag twirlers on Grand Hotel Baglioni’s terrace, our customary Gala Dinner took place, preceded by  two important and participated moments:  the presentation of Panathlon International Communication Award, conducted by the Past-President Mr. Giacomo Santini who, together with Mr. Ernst Denoth awarded the winners of the Contest with a video projector and a camera: Club Pavia (internet/social) Club Varese (media/printed material) and the Club of Maldonado y Punta del Este (TV/radio) the event following was the award on behalf of the Italy District of the “Chiesa Award” to Adriana Balzarini for her commitment in the dissemination of panathletic values through the  Exhibition on women’s emancipation in sport (which is available on the website of the Mestre Club: www.panathlonmestre.it)

The exhibition of the 15th International Graphic Contest of PI - Domenico Chiesa Foundation and the PCU Drawing Contest, with the presence of Peter Verschoren of the University of Antwerp, Peter Verboven, PCU President and  Alina Baranova, were the setting for 5 Florentine days.